On the second day of SOLIMED conference, along with Sea-Watch, I have taken part in a workshop focussed on search and rescue in the Mediterranean and its bottlenecks. Many other NGOs were around the table, like SOS Mediterranée, Médecins sans Frontières, Hellenic Rescue Team, Proactiva Open Arms, and many others.

One of the subjects was the cooperation between the military and search and rescue NGOs. It has been highlighted that instead of speaking of “military”, a clear distinction should be made between the existing operations of FRONTEX, NATO, Operation Sophia, etc.  Indeed, all missions have separate action plans and should not be considered as similar, as it has been experienced in previous missions when some ships agreed to cooperation in rescue operations, and others admitted not to be able to take part in them since it is not in their action plan/tasks.

A legal presentation of the environment in which rescue operations take place highlighted the fact that, in this maritime operation zone, multiple legal regimes apply simultaneously. Also, since multiple actors are also involved, many responsibilities are not taken by states who seem not to balance their powers with their obligations. 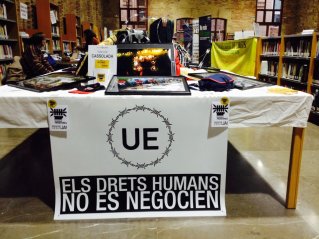 In general, a lack of cooperation between SAR NGOs has been pointed out as hindering the operations when if some logistical and operational elements were shared, then less time would be wasted, and the missions would become more effective. However, all though many NGOs agreed with this, what seemed to be the main cause of the current cooperational situation is the lack of resources.

Sea-Watch’s opinion on this matter was to agree on the need of cooperation, but it is first necessary to create strong common pillars of search and rescue at sea before building cooperation modes. There is a need to put the main principles of such operations on paper.

The subject of criminalisation of search and rescue operations has been raised by Proemaid since too many of their volunteers have been arrested while rescuing people in distress. This situation should be denounced, as it is a legal and human obligation to rescue those in danger to see their right to life respected.

Finally, Proactiva Open Arms has presented a common protocol for rescue operations at sea that could be presented to MRCC Rome, and that could allow a better coordination of the operations in the rescue zone. However, for this coordination to be effective, all NGOs concerned by it should also add some input so all can agree on a common way of proceeding.

Many improvements are still to be done to increase effectivity of search and rescue missions, and the more NGOs communicate and cooperate, the easier it will be.

Intern at Human Rights at Sea,

On secondment to Sea-Watch.