On October 13 at midday the Sea-Watch Team gathered in Berlin on the shore of the Spree, the river crossing the city, right in front of the German Bundestag. That is the building where all relevant political decisions are taken, as the ones that recently have been remodeling the German policy with regards to immigration.

Sea-Watch organized a public demonstration, which consisted in putting 120 volunteers on board of one of the migrants rubber boats rescued during the missions in the Central Mediterranean and brought to Germany as evidence.

The Team unfloated the boat in Lampedusa, transported it to Germany, fixed it and put it in the water again. It is probably the first time that one of these precarious crafts are used a second time. The idea behind this action is to bring under the eyes of the European citizens the daily tragedy lived by thousands of people at the southern maritime borders of the EU. For this reason, the organization invited the members of the Parliament to go on board, together with volunteers. Some did. With them there were also a few refugees, which brought their witness and joined the people on the rubber boat.

“Welcome back, thank you.” I ironically said to one of them while helping him to jump inside the boat. They would have never wanted to be on that kind of boat another time, yet they did, to stop the deaths at sea and to facilitate the creation of a safe passage. The Sea-Watch Team boarded 130 people on the rubber boat. During the sail the refugees were commenting that there was enough space for more people, while the boat was actually extremely overcrowded. They also found funny that we were all wearing lifevests, as they did not, in the open sea.

After having rescued 2000 people, Sea-Watch brought a concrete sign of its commitment with the migrants cause in the Mediterranean. The rubber craft surely does not represent an award, but rather a symbol of the suffering of those who engage in the deadly journey towards Europe. These journeys have to stop. These boats should not sail anymore. Meanwhile, apart from the one used by Sea-Watch last Tuesday, thousands of sunken rubber boats will silently lie for ever in the depth of the sea. 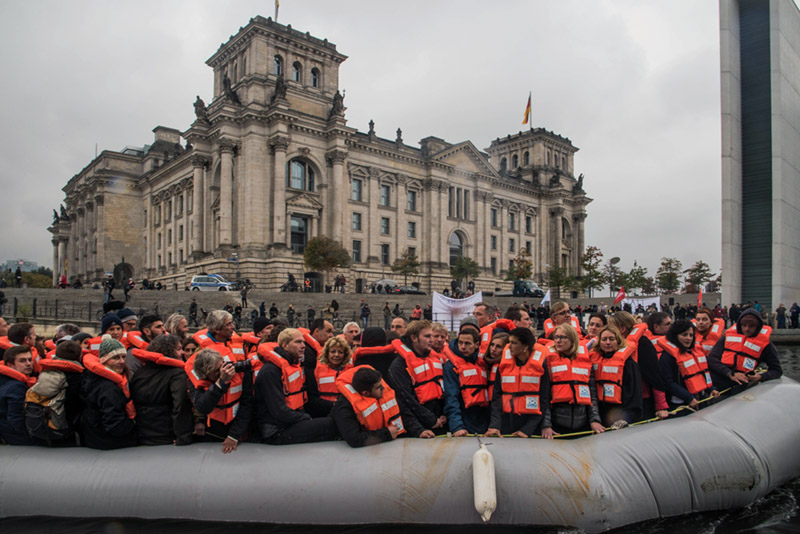